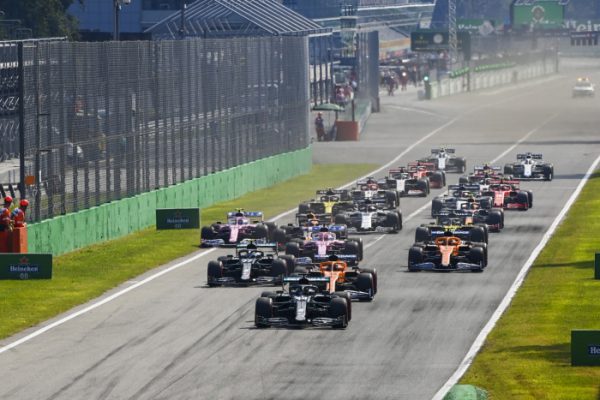 A1 Team Italy has secured its first-ever A1GP World Cup of Motorsport Feature race victory in an incident-filled event in Beijing, China. A1 Team Great Britain claimed second position behind Italy’s Enrico Toccacelo, with Australian Karl Reindler third after Sprint race victor Netherlands crashed out of the lead with only nine laps remaining. France was a startling fourth after starting 17th on the grid, with South Africa and the Czech Republic fifth and sixth respectively.

Polesitter Netherlands’ Jeroen Bleekemolen got away cleanly from the start behind the pace car with Mexico’s Salvador Duran in touch in second, however the race was interrupted on lap two when A1 Team Pakistan’s Nur Ali went into the barrier at turn three, damaging his front wing and stalling the engine. With the car in a dangerous position, the safety car was deployed to allow rescue vehicles to recover the Pakistani machine. There were also problems on the same lap for Ireland, as Michael Devaney attempted to return to the pit lane to change a flat rear right tyre. The Irishman clipped the entrance of the pit lane, stalling the engine, and marshalls were forced to push him back into a run-off area.

When the safety car pulled off on lap nine, Bleekemolen and Duran resumed their battle for the lead, however the Mexican’s charge was prematurely halted when he lost second gear, touched the barrier and slowed. Italy and Germany seized the opportunity to dive in front of Duran, relegating the Mexican to fourth position. Unable to turn into the tight corners, Duran retired the following lap.

Netherlands and Italy remained closely matched until the first round of pit stops on lap 20. Their early stop advantage was however negated when the safety car was deployed on their out laps to allow marshalls to recover the Swiss car of Neel Jani, who had spun close to the entrance of the pit lane.

When the safety car pulled off on lap 27, Canadian James Hinchcliffe was forced to defend his inherited lead from hard-charging Brazilian Raphael Matos. The Brazilian almost pulled off a bold move on the Canadian through the hairpin, but Hinchliffe held his line and his nerve to keep the lead. Nineteen-year-old Hinchliffe remained in front until his pit stop and looked set to extend his season points haul until a tussle with France’s Nicolas Lapierre on the penultimate lap put the Canadian into the wall and into retirement from the race.

A1 Team Germany lost the series’ lead when Nico Hülkenberg retired in the pits on lap 53 with a gearbox problem. Hülkenberg’s misfortune was Italian Toccacelo’s gain as he was elevated into the lead of the race following the German and Dutch retirements. The Italian was delighted to hold onto the lead until the flag fall, “This is a really good result for us and I am really happy to be back here in A1GP, in Beijing and winning the race. In the first race I was third and was really pleased because I was pretty confident as the car was quite good. I have been a little bit lucky in the last laps but anyway I feel the car was good and I was the quickest in the race. It is really great and I want to say thank you to Team Ghinzani.”

Great Britain’s rising star, Oliver Jarvis, similarly benefited from Germany’s problems as he moved into second overall, a stunning result for the young Brit on his A1GP race debut. “At the start of the race the team discussed the strategy and we knew it was all going to be about being there at the end as it is a street circuit. A lot of people made mistakes and also the car struggled to get over the kerbs and the bumps. I am delighted with second for myself and the team. I think we could have had a better run in the first race but at the end of the day we have ended up on the podium and that is where we want to be.”

Karl Reindler completed the top three, the Australian having a stunning race to move up nine places over the 63 lap race, “It was quite a race. I had no idea where I was until the final safety car. The race just fell into our hands pretty much, we had a great strategy and we had a briefing before the race and decided to wait to pit and it worked out in the end. It has been a bit of a mixed up weekend and a mixed up race but it is great to be up here.”

South Africa’s Adrian Zaugg just pipped Tomas Enge to fifth place after the Capetonian made an audacious move round on the inside of the hairpin. Brazil and Singapore completed the top eight, Christian Murchison securing the Asian nation their first-ever points in the A1GP World Cup of Motorsport.

Mexico now head the series’ title race going into the next A1GP round in Sepang, Malaysia, which will be held on 24 – 26 November 2006.