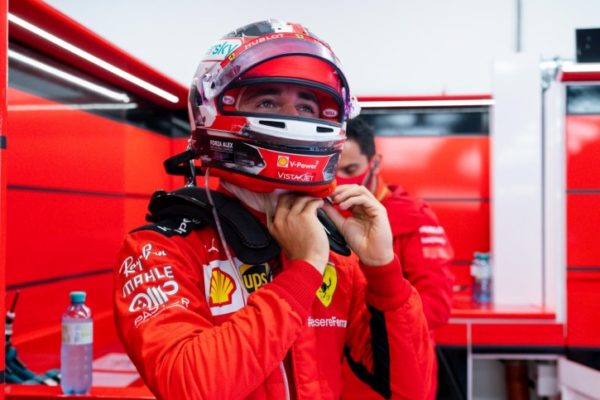 The Monaco-born driver was leading the French GP at Paul Ricard when he lost control and nosed into the barriers.

An initial radio call about the throttle raised suspicions that Leclerc had actually suffered a technical problem – but the 24-year-old quickly accepted the blame.

“If we end up losing the championship, I know what the reason was,” he said.

Team boss Mattia Binotto, however, defended his driver – even if he denied there had been anything wrong with the throttle.

“The reference to the throttle was about his attempt to reverse out of the barrier. Unfortunately the nose was completely stuck,” Binotto explained.

“But Charles is a champion and no one in this team will ever question our confidence in him,” he told Sky Italia.

“We have lost many points in different ways, and we will earn points in other ways,” Binotto added.

“Let’s turn the page. It makes no sense to discuss a mistake by a champion like him. We are already thinking about next week.”

In the points standings, however, reigning champion Verstappen has now been handed a commanding 63-point lead with the summer break now looming.

“I mean, it’s a great lead,” said the Dutchman. “But a lot of things can happen and I just want to stay focused.

“We still need more one-lap pace. I also think Budapest is going to be a bit more of a struggle for us. I think Ferrari is going to be really, really quick.

“Again, it’s all about scoring points in every single race even when it’s not your day,” Verstappen added.

Red Bull’s Dr Helmut Marko, meanwhile, even had some sympathy for the inconsolable and contrite Leclerc.

“It’s a pity what happened to Leclerc,” said the Austrian. “It would have been a top-level fight in which we probably would have had an advantage.

“It’s also a shame that before that he already retired twice due to problems with the engine. It’s a pity that mistakes keep happening in such a great duel.”

Team boss Christian Horner agreed: “It’s a real shame that we don’t know how the race would have ended.

“But I wouldn’t call Leclerc a ‘crasher’. Those two are putting a lot of pressure on each other, driving cars beyond their capabilities.

“So we see it as Charles’ bad luck is our good luck, but in the course of the season the pendulum will swing first in one direction and then the other.”

“All of us are going to the limit and this is what happens sometimes,” he added.

However, Ferrari is also making unforced errors – like Sainz’s penalised ‘unsafe release’ from a pitstop and also an apparently bungled strategy that arguably cost him the podium.

“The greatest support for Red Bull in this championship is Ferrari,” Ralf Schumacher told Sky Deutschland.

Nico Hulkenberg, meanwhile, quipped: “It’s not rocket science. Even us on the outside and even Carlos in the cockpit could see it was a mistake.”

Again, however, it was Sainz who defended the Ferrari team.

“We are heavily criticised for things that happen to other teams in exactly the same way. But we’re not the disaster that people always say we are.”